The quiet revolution on our roof started a year ago and we’re loving it. So here’s everything you have always wanted to know about installing solar power (in Nova Scotia).

We live at 45N on the right side of the continent, exposed to the Labrador current. Result: very cold winters. We average 1,806 sunshine hours per year, distributed over 287 days (source).

In 2002 we rebuilt and expanded this modest 1950 bungalow into a roomy house. We did look into installing heat pumps then but the house never had ducts, and we didn’t want the (extra) construction. We added a studio (for my artist husband). The studio is expensive in winter: it’s a separate 324 sq ft (36 sq m) building on a concrete slab with in-floor heat supplied by its own hot water tank. It’s very well built and insulated but still costly. The studio heating system is completely turned off from mid-May June to mid-October. It has a programmable thermostat; the artist doesn’t keep it very warm and uses a stand-alone space heater (and special studio woolly!) when he is there on cold days. We don’t have air conditioning anywhere.

The original bungalow never had a furnace. It was heated with wood and electric baseboards. We upgraded the latter to efficient electric radiators and installed a programmable thermostat in each room. The house has an insulated basement which contains utilitarian spaces that don’t need (much) heat. The basement also contains the guest room which faces the garden and two of its walls underground. We have an airtight wood stove which essentially heats the main floor (living/dining/kitchen, our bedroom, my study). It burns through 2 cords (7.2 m3) of hardwood between early December and early April. In the middle of winter, the stove burns 24/7 for about two months. The house and studio are 3,200 square feet (356 square meter) large with standard 8 ft (2.30 m) ceilings.

Because it never had a furnace, the electricity bills were always high, wood stove or not. 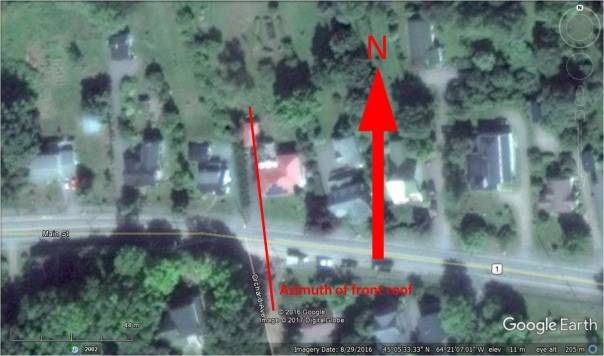 Here is our house on Google Earth – the red roof is us. The solar panels are on the front (dark triangle). The front of the house is oriented SSE.

This picture was taken in March from the front steps looking south. There is a big maple tree on the corner of the property (left in this picture) but it never gives shade. The big house to the right sits higher and is surrounded by large deciduous trees. When the sun is lowest in winter, those bare trees (on the right in the picture) do actually block the afternoon sun, as we’ll see later.

Our research was made simple thanks to an energy expert friend who provided free advice. He organized a field trip to the house of someone who had installed solar panels and we got to see the whole thing and ask every question we could think of. They had also thoroughly researched solar panel companies so we went with their advice and recruited Fundy Solar out of Moncton, NB.

Before we continue, this fact sheet tells you what earth materials are used to make solar panels.

The prognosis for our house, given its exposure and the number of panels we could install, was that we would produce 4 to 4.5 MWh. We decided that would be worth the investment because that could be 1/3 of our annual total electricity bill (sneak preview: we produced 4.42 KWh, indeed almost 1/3 less than our previous power bills!).

We signed the contract with Fundy Solar in the late Fall of 2015. The total bill was Can$15,000 for 15 panels. The price has since dropped of course. Had we been able to add more panels, it would have been cheaper per panel (i.e. I’m not suggesting it was $1000/panel, that was an accidental outcome). There is no subsidy for adding renewable energy to the grid in Nova Scotia, the investment was ours.

We don’t store! We didn’t want batteries and a whole separate wiring system. We have a contract with Nova Scotia Power: we provide power to the grid and get reimbursed at the standard rate. Other (Canadian) jurisdictions have incentives for solar, such as a one-time subsidy and/or a higher price for energy produced, but that’s not the case here.

Because we are now an electricity supplier for Nova Scotia Power, they have a role in it as well. NS Power inspects the installation of the panels twice, once at rough-in stage and once at the very end. Fundy Solar installs the panels, but the electrician is independent and is licensed by NS Power. The licensed electrician meets twice with the NS Power technician at the property for the inspection. After the last inspection, NS Power installs the 2-way meter and flips the switch!

What it looks like on the outside of the house and in the meter-closed right behind it. The diagram shows all the technical details, the box below it is part of the Enphase system, which I talk about below

The bill from Nova Scotia Power now includes two meter readings, one for KWhs used and one for KWhs sent to the grid.

The panels will work efficiently for at least 20 years. By that time newer models will have come out and the future owners of our house will update the system.

Keeping an eye on those lovely data

The truly fun part of this adventure is Enphase, the internet-based system that lets you keep track of what your panels produce and do all the statistics. Enphase tells you every 15 minutes how much the panels have produced and there’s an app of course, so you can check your panels’ workings wherever you are in the world (and our solar company has access to our Enphase as well, so we can communicate about possible failures with them).

Enphase’s output for 4 very sunny days close to each solstice. The system gives a reading every 15 minutes.

Cumulative production in Wh from May 6 2016 to May 6 2017, our first full year. The blue accolade shows that we produced not quite 500 kWh between early November and early March. In other words: almost 90% (the other nearly 4,000 kWh) was produced during 8 months. Production during the 4 winter months is almost negligible.

We have a metal roof from which the snow slides off fairly quickly. The panels are smooth and also function as a slide. But, depending on the amount of snow, it will be on for a few days. Enphase then gives an error warning, which would be the same in case of a power outage (which we didn’t have all year). See picture below. We lost 3 weeks of production to snow, but that was all during the season that the sun is so low and the days so short that we don’t produce anything meaningful anyway. The exception was late March when we suddenly had 2 sunny days under snow.

Panels covered in snow. Most inverters don’t get any input and produce an error message (orange icon in corner of panel)

You can’t not do this even in our jurisdiction which lacks subsidies for solar. We save money every day and we use fewer fossil fuels and are just as comfortable as we were before. So here we are: wood and solar are the way to go in Nova Scotia!

I am an earth scientist. Understanding earth is essential for the well-being of our global society. Earth is fascinating, science is fascinating and a better understanding of both can help society forward. This blog attempts to make a contribution to raising awareness of these issues.
View all posts by earth science society →
This entry was posted in climate change, Energy. Bookmark the permalink.

1 Response to Our First Full Year under Solar Power