The preamble to this review series is here

Posted today, February 12, the 206th anniversary of Charles Darwin’s birth and just in time for tomorrow, another #FossilFriday and another day to watch Dino Hunt! 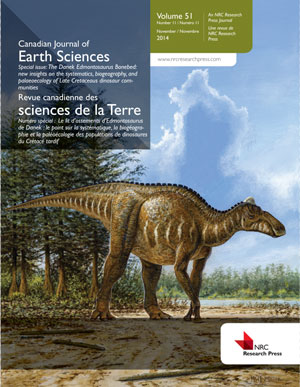 Cover of the December 2014 special issue of the Canadian Journal of Earth Sciences, dedicated entirely to the Danek bonebed.

If you live in Canada and have TV, you should watch it: Dino Hunt! Every Friday evening at 9 pm Eastern, that is – if your cable provider has the History Canada channel (I bet 24 Sussex Drive in Ottawa does). Whether you do or do not have TV, check out the Dino Hunt website, as it is chock full of fascinating information and you get to meet Canada’s dinosaur hunters, i.e. paleontologists.

Earth Scientists owe a lot to Michael Crichton for penning “Jurassic Park” in 1990 and subsequently to Steven Spielberg for making the movie in 1993. The popularity of dinosaurs, already substantial, instantly skyrocketed and continues to do so. At least that aspect of earth science can bask in a reasonable amount of public interest and understanding. And who wouldn’t be awe-inspired by these magnificent beasts that once roamed our planet in great hordes only to become extinct suddenly, most likely after a 10km-diameter asteroid slammed into what is now Mexico’s Yucatan Peninsula?

Canada has world class dinosaur fossil sites. Most sites are in Alberta, but there are also sites in Saskatchewan, British Columbia and Nova Scotia. Dinosaur Provincial Park in Alberta is one of Canada’s 17 UNESCO World Heritage sites. Close by is the Royal Tyrrell Museum, which hosts magnificent dinosaur displays and also functions as a research centre. The small community of Tumbler Ridge, British Columbia acquired Global Geopark status last year because of its rich diversity and extent of dinosaur trackways (see my earlier post on Canada’s Geoheritage here) and the world’s oldest (and tiniest) dinosaurs are found near Parrsboro, Nova Scotia, where the Fundy Geological Museum does them justice.

And then there is the Danek Bonebed, smack in the middle of the city of Edmonton. It was discovered in 1989 by an amateur fossil collector, initially excavated by the Tyrrell Museum and closed up again in 1991. It was reopened in 2006 by the University of Alberta’s Laboratory for Vertebrate Paleontology, which is led by world-famous paleontologist Dr. Phil Currie, who is part of the department of Biology (paleontology straddles the earth and life sciences and you might therefore find academic paleontologists in both biology and geology departments). The “Currie-stable” (if I may) has produced and continues to produce highly respected paleontologists, several of whom also feature on Dino Hunt.

What is special about the Danek bonebed is that is serves as the basis for a University field course, as a citizen science program (more than 4000 hours of volunteer service have been donated to its excavation) and as a prime public education site as well as an ongoing research location.

Location of the Danek bonebed, exposed in a creek that is part of the Mactaggart Sanctuary in the city of Edmonton.

The Danek bonebed is the subject of the December 2014 special issue of the Canadian Journal of Earth Sciences. There are 12 articles in this volume. Its title is the same as that of the introductory article by the issue’s editors, which I cite below.

So I had 12 articles to choose from! Why did I pick this one? Two reasons:

1. this paper is a perfect demonstration of how the daily practice of science is often mind-crushingly boring. Paleontology is about collecting. In order for a collection to be worth anything to proper and further investigation, in a manner that will make it a worthwhile to the global understanding of evolution, the collected bits must be catalogued and documented in great detail. Where was this little bone found exactly? What number does it get? What sort of a bone is it? What species did it belong to (ok, they know that here, because almost all of the bones in the Danek bonebed belong to Edmontosaurus regalis individuals, but still)? Talk about tedious. All in the name of science.

1. The paper reminded me of an important learning moment in my own experience: some 25 years ago, the office next to me was occupied by a PhD student in vertebrate paleontology. His subject was a cave on the island of Sardinia, on the floor of which were thousands of antelope bones. The question was whether those antelopes died a natural death or whether early humans used the cave as a place to deposit their hunting caches. How would one be able to tell? The student had mapped the bones on the cave floor in great detail and then sought help from geophysicists. Geophysicists were then just beginning to write programming that would enable recognition of patterns on seemingly chaotic seismic lines. This programming was applied to the antelope bonebed to find out whether its bone distribution was random (i.e. the result of a mass dying of natural causes) or – in some way – orderly (i.e. the result of humans depositing bones). To be honest, I don’t know what the outcome of that research was, but I have never forgotten how what was then brand new technology being developed for oil and gas exploration was applied to a completely different research question. That happens often, but it’s important to know that it does, in case someone has yet another cynical question about what this bit of academic research is actually good for?

The same is the case here. GIS technology (GIS stands for Geographic Information System), is information technology in a spatial context. The technology is less than 50 years old, was pioneered by British-Canadian Roger Tomlinson, and it continues to develop rapidly. It was designed for statistical mapping but quickly became used for investigating a plethora of other questions that require insight in spatial distribution of phenomena.

And so, after an immense amount of precise taxonomy and catalogueing, a researcher can open the Danek GIS-file, type in ‘femur’ in the search window and up pops the image below, highlighting every bone (within a precisely mapped quadrant) that is a femur. If the researcher then clicks on a particular femur, the database opens showing her all the parameters of that particular bone (length, amount of damage, from a juvenile or an adult, etc. etc.). This is an incredible tool for current and future researchers, a fantastic application of new technology in the still developing field of evolutionary biology = paleontology.

An example of results if the researcher searches for ‘femur’ (bold black bones in the image). Figure 3 from the article by Bramble et al.

Early earth scientists, Charles Darwin among them, researched fossils intensely, making paleontology one of the corner stones of earth science. Nearly two hundred years later, the field is still developing rapidly using brand new technology and our understanding of evolution is growing with it.

I am an earth scientist. Understanding earth is essential for the well-being of our global society. Earth is fascinating, science is fascinating and a better understanding of both can help society forward. This blog attempts to make a contribution to raising awareness of these issues.
View all posts by earth science society →
This entry was posted in Canadian Earth Science for @PMHarper, Geoheritage, Paleontology and tagged Alberta, Canada, Dinosaurs, earth science, evolution, extinction, geology, geoscience, paleontology. Bookmark the permalink.