A #tsunami is really a tidal wave, except it isn’t

This week marks the 10-year anniversary of the Great Sumatra earthquake which triggered the devastating Indian Ocean Tsunami that killed a quarter million people. A rare and devastating event in itself, it was followed in March 2011 by an even larger earthquake and ditto tsunami in Japan, now known as the Tohoku event.

Two-thirds of the world population live at or below sea level. Almost all tsunamis are generated by oceanic earthquakes and are therefore a serious risk in many parts of the world.

Let’s look at what kind of waves there are:

Different types of waves, the forces that cause them (‘disturbing force’) and the forces that restore them. In this diagram, wave height is shown along the vertical axis in centimeters and wave period along the horizontal axis. Wave period is defined as the time interval between the passing of two successive wave crests (figure compiled from P. Pinet “Invitation to Oceanography”  and from J.A. Knauss “Introduction to physical oceanography”)

On the left hand side of the diagram are wind-generated waves. To the right are Tsunamis and Tides (in between are “Seiches”, which I won’t discuss: here is a good link). Both wind-generated waves and Tsunamis & Tides can have wave heights of more than ten meters (1,000 cm). But wind-generated waves have fairly short wave periods, less than 100 seconds, whereas Tsunamis have wave periods anywhere from a few minutes to two hours. That means that the distance between two successive wave crests (the wavelength) of tsunamis is very long, much longer than for wind-driven waves. Tides, which are largely controlled by the gravitational effects of the Moon, have a wave period of twice 12.5 hours, because it takes the moon 25 hours to orbit around the earth.

Now let’s look at waves from a different perspective.

When a wave (energy) passes through a water body, the individual water particles make circular motions as shown in the image below, and this is what causes the wave, i.e. the energy, to travel. The image below shows how that looks in a so-called Deep-water Wave. 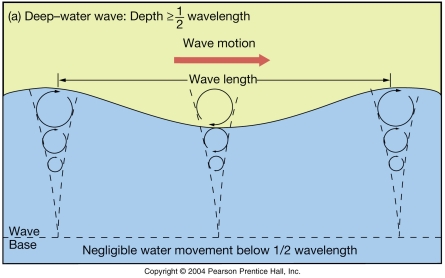 A deep-water wave. Water particles move in circular fashion. The force that drives the wave is usually the wind. The wavelength is the distance between two successive wave crests. For a deep-water wave, the water depth is greater than half the wavelength.

Wind-driven waves in the open ocean can have wavelengths up to a few hundred meters. Therefore their wave base is always in the water column (it doesn’t hit bottom) because the open ocean is on average 4 km deep. From the wave’s perspective the water is always deep. That’s why these waves are called “Deep Water Waves”. Deep Water waves travel with a velocity that is proportional to their wavelength, and because their wavelength is at most a few hundred meters, they don’t travel very fast. They move unobstructed across major water bodies until they arrive in water depths that are shallower than half their wavelength. Then their character changes to that of a Shallow-water Wave.

What is a Shallow-water Wave?

A shallow water wave is one of which the wavelength is greater than 20 times the water depth. The average depth of the oceans is 4 km, so their wavelength can be 80 km or more! The speed of a shallow-water wave is proportional to the water depth and independent of its wavelength. Hence, in great water depths, they travel very fast. Tsunamis and tides are shallow-water waves. A tsunami typically has a speed of about 800 km/hr in the open ocean. But their wave height in the open ocean may not be more than 1 m (see for example this link).

When a wind-driven deep-water wave approaches the shore, it becomes a shallow-water wave at some point. It starts to slow down due to friction against the bottom. But it doesn’t lose energy, at least not right away. What happens when a wave slows down but retains its energy? The wave height increases (this makes the surfers happy). At some point, the wave becomes higher than the water is deep (remember, we’re running up to shore). At that moment the wave becomes unstable and breaks (this makes the swimmers happy), and that’s when it loses energy quickly. The beach is formed in equilibrium with the average breaking wave height in a specific area (when the occasional exceptional storm hits the coast, the beach is not in equilibrium and the result is erosion).

The shallow-water waves that are Tsunamis travel at velocities of hundreds of kilometers per hour. They have such speed that they won’t be slowed down by the regular beach, they are not in equilibrium with the existing coast. As they run up the shore and before they break, their height increases massively and they destroy everything in their path until their energy is finally lost.

People are used to tides and tides can be predicted with great precision. For example, here in my back yard, in the Bay of Fundy, where the tides are higher than anywhere else in the world, high tide at Saint John occurs exactly 1 hour before high tide at Burntcoat Head, which is 180 km away across the water (see figure below). In other words: the-wave-that-is-the-tide travels at a speed of 180 kilometers per hour (yes, this creates potential for tidal power generation, about which I wrote an earlier post here). It runs up the coastal plain and submerges everything but because it does so twice every 25 hours, the shape of the coastline is in equilibrium with this phenomenon: it consists of vast expanses of tidal flats.

So a tsunami behaves exactly like the incoming high tide, with an even higher velocity. But because tsunamis happens to rarely, there are no tidal flats to indicate where you shouldn’t put your dwelling. In essence, people in tsunami-risk zones live in an overgrown and built-up ‘tsunami flat’.

People will continue to live near the sea for many reasons. There is now a tsunami warning system for the Indian Ocean, but lives will still be lost the next time a Great Wave materializes.

I am an earth scientist. Understanding earth is essential for the well-being of our global society. Earth is fascinating, science is fascinating and a better understanding of both can help society forward. This blog attempts to make a contribution to raising awareness of these issues.
View all posts by earth science society →
This entry was posted in General geoscience, Natural hazards and tagged coastal zone management, earth science, geoscience, Minas Basin, natural disaster, natural hazard, oceanography, Science, tides, tsunami. Bookmark the permalink.