Nova Scotia is where I live – a 700-odd km long NE-SW peninsula that more or less parallels the edge of the continent. What (almost) separates us from that continent is the Bay of Fundy, the Canadian extent of the Gulf of Maine. The ca. 300 km long Bay of Fundy has the world’s highest known tides, rising as much as 16m in upper Cobequid Bay. 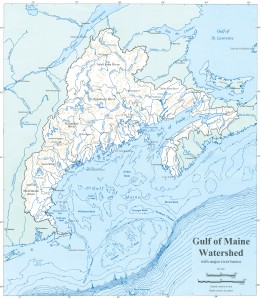 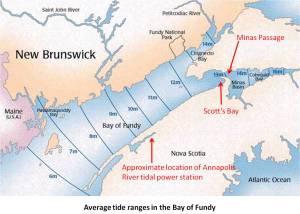 Figure 1. Left: Gulf of Maine and Bay of Fundy watershed map. Right: Bay of Fundy with tide ranges. In red the different localities discussed in this post.

Extracting energy from the Fundy tides is an old dream that was first articulated about 100 years ago.

A barrage-type system typically generates power on the basis of gravity, much as in a classic hydro-electric dam. Barrage-type tidal power stations thus require the construction of a solid dam, undoing the estuary. In the early decades after WWII nobody thought twice about undoing estuaries and damming rivers and in the process we lost thousands of free-flowing rivers and estuaries with catastrophic results for global ecosystems. I’m going to assume that my readers are familiar with the controversies. 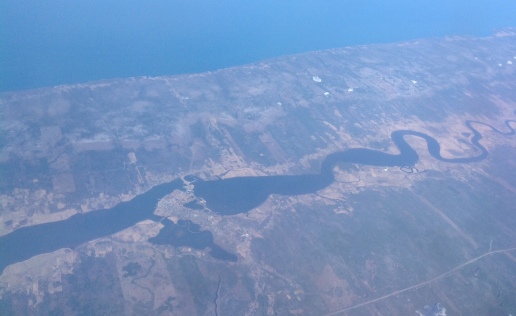 Figure 2. The Annapolis River at Annapolis Royal (NS). The Tidal power station sits in the middle of the dam that crosses the river. View to the NW. The open estuary is to the lower left. Photo E. Kosters

The Annapolis River tidal power station doesn’t contribute much to our daily energy needs, but it’s an interesting showcase. Even though there was much less public debate about damming rivers and estuaries in the early ’70s than there is now, the debate about the negative impacts of the Annapolis River tidal power station on the regional fish stocks is ongoing.

In the late 1970s, Nova Scotia considered constructing a tidal power barrage-type dam in Cobequid Bay (figure 1). As one local friend tells me “the dump trucks were ready to start piling rip-rap in the bay when word came that the plan was off”. The reason for canceling the plan was that the oceanographers at Bedford Institute of Oceanography had calculated that a dam in Cobequid Bay (where the tide range averages 14m) would reflect the tidal wave in such a way that the average tide range in Boston would rise by at least 30 cm. The amphidromal point (node) of the Bay of Fundy’s tidal wave sits more or less on the George’s bank (in the Gulf of Maine) and the Bay of Fundy is getting close to resonating with the semi-diurnal tidal wave of the Atlantic ocean so the crest of the wave is more or less at the head of Cobequid Bay (at a town called Truro). Canada didn’t want to risk angering its neighbour and having to pay for the damages. The dam was off.

Roaming around this area now (I didn’t live here at the time of this barrage proposal), I find it hard to believe that anyone would have agreed to simply clip out part of this stunning landscape. 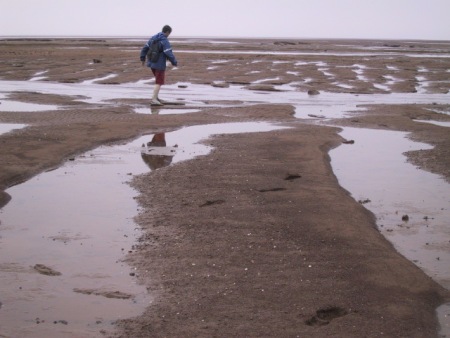 Figure 3. Upper Cobequid Bay – these tidal flats would have disappeared behind the tidal power dam that was almost built in the late 1970s. Photo E. Kosters

The interest in tidal power generation subsided until the late 90’s when new technologies and concern about climate change brought the subject back on the global agenda. By this time, we knew that damming estuaries was damning to the environment and thus to ourselves. So this time the focus is on ‘in-stream tidal power’. No damming required. Estuaries stay open to the migration of fish and water and nutrients. A large variety of turbines is designed and tried out all over the world. The engineers are having a ball. Examples are here and here and here and here (random examples).

One of the world’s most powerful currents runs in Minas Passage (Figure 1 above) – current velocities of more than 10 knots (5 m/sec) are not uncommon.

Until a few years ago, Nova Scotia generated close to 60% of its electricity by burning coal. The provincial government decided to aggressively reduce that proportion and invest in green energy schemes. Within a few years, the proportion of coal-powered electricity dropped to just over 40%. The government invested heavily in attracting tidal power companies. There is essentially an open bid system. Also, after much research, Nova Scotia ‘opened’ a government-supported berth in Minas Passage (Figure 1)  in 2009. The research that led into the definition of this berth was thorough: multibeam bathymetric surveys, sediment dynamics studies and all kinds of biological research were carried out or summarized from existing literature. The first pilot turbine was placed on the berth in the Fall of 2009. 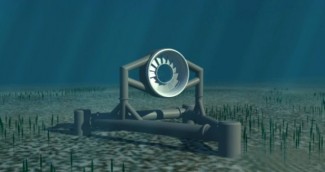 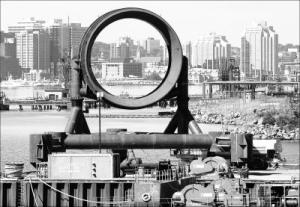 Not a success right away: the turbine – carefully selected from a number of proposed models, had lost all its blades within 2 weeks of having been placed. To this day, nobody understands how, except that – clearly – the currents are more violent and destructive than anyone had anticipated. A learning experience! Things have slowed down somewhat since then, but nobody is giving up hope. The NS Government, together with a variety of stakeholders has created Force. The FORCE interpretation centre sits where the specially made electricity cable from the Black Rock berth area comes ashore and is open to the public. The next pilot turbine is supposed to be placed later this year. We are still in the experimental stage. We keep our hopes up. A smaller-scale experiment is running further south along the Fundy shore.

There is an in-between type of tidal power generation, called ‘tidal lagoon’. Essentially this is a dam, built in an estuary, sometimes connected to the shores, but sometimes isolated by itself, with multiple turbines in the dam. As the tide rises, the lagoon fills with water through the turbines (in some types the turbines generate power both on the incoming and on the outgoing tide) and later empties again.

No tidal lagoon has been built ever. Anywhere. There is a proposal for a tidal lagoon off Swansea (fabulous website) in the Bristol channel where the tides rise as much as 9 m. It’s under investigation.

Recently, Halcyon Tidal power submitted a proposal for an enormous lagoon, to be constructed from shore to shore at Scott’s Bay, NS. 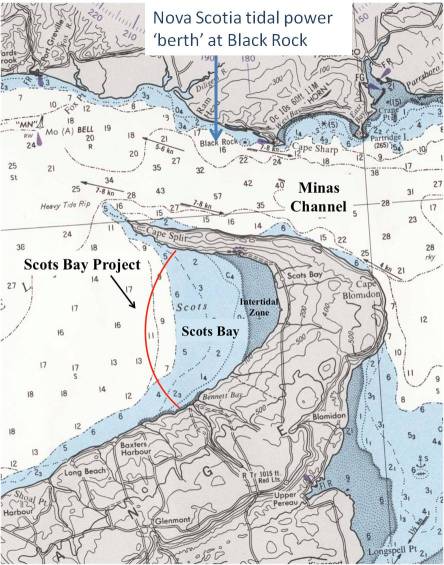 Figure 5. Halcyon’s proposed lagoon. The dam will be nearly 9 km long and will contain dozens of turbines. Ca. 250 people live in Scott’s Bay. Note location of the official berth at Black Rock on the north shore of Minas Channel (a.k.a. Minas Passage).

Halcyon is a two-person American company, consisting of an engineer (Dr. Atiya) and a venture capitalist (Craig Verrill). Dr. Atiya holds the patent to a special turbine and he is anxious to deploy it.  Halcyon hosted a community meeting for the people of Scot’s Bay to present and discuss their plan. The meeting is reported here. It was a shameful event for Halcyon: the two gentlemen came with 8 or 10 illegible slides, appeared ignorant on crucial issues of the hostile physical environment and infrastructural requirements. They were also unaware of essential research of the Geological Survey of Canada, were unaware of the electricity need of Nova Scotia (their lagoon would generate far more power than we can use and we have no infrastructure to ‘get rid of it’) and generally displayed a contemptuous and patronizing attitude towards their audience.

Despite their inability to answer simple questions, they had no problem making strong statements. Among others, they stated emphatically that the tidal regime in Scott’s Bay would not change at all (!) due to the construction of this dam; the tidal cycle would only be delayed by 1 hour (exactly….) compared to that of the open bay. Especially this last statement (also present on their website) really puzzled me. Because you need very sophisticated models to make such a statement and they didn’t even know the first thing about some of the basic physical constraints – how could they make this statement?

Several years ago, a different company proposed to build a tidal lagoon in Minas Basin, more or less on the location where the barrage was supposed to be connected to Minas Basin’s northern shore in the 1970s. At the request of the NS Government, scientists of the National Research Council set out to model the potential effects of such lagoons. The modelers recently published their article (Cornett et al., 2013 – see below for full reference). These lagoons would require a dam of about the same length as the one proposed for Scott’s Bay, i.e. they may be thought of as somewhat comparable.

If you have the least bit of interest in tidal power generation, I encourage you to read this article, it’s a beauty. I enclose only one illustration here 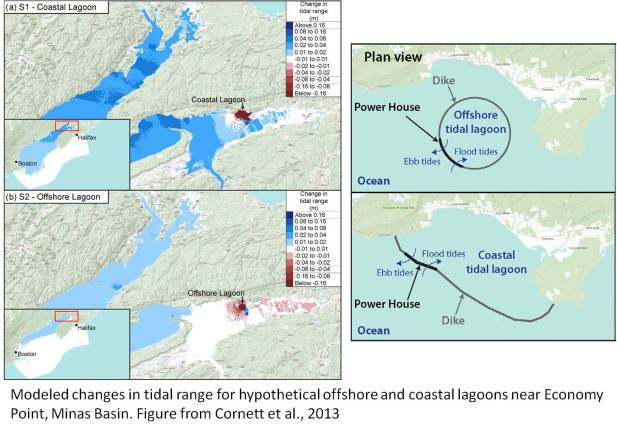 Some of their conclusions (exact quotes):

Nice – when all you need to do is quote. Nothing more needs to be stated, right?

Altogether aside from these geotechnical complications is the issue of Scott’s Bay itself. Should we even consider damming off a part of this breathtakingly beautiful bay? Few people live in Nova Scotia: we are less than 1 million (and greying). One third of us live in greater Halifax, the rest live spread out along our 4000+ km coastline. The climate isn’t great, we are far from markets, our soils are hostile, our seas and bays are overfished. But we have stunning natural beauty and the Bay of Fundy rightfully competed with 20 other locations for ‘one of the seven natural wonders of the world’.

We must reduce our use of fossil fuels and we must explore and deploy green energy, including tidal (and wave!) energy. But we can’t afford to move forward in the same manner that we’ve done for hundreds of years, namely by rash development under the justification of ‘green energy’. We must research and explore tidal power, but I think only true in-stream tidal power – and we don’t need bullies. 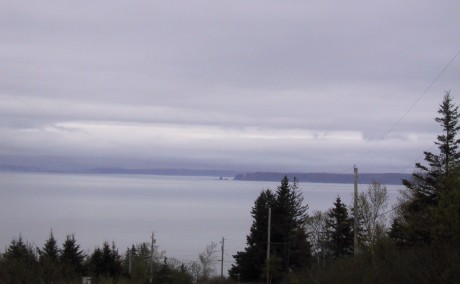 Figure 7. View across Scott’s Bay from above Baxter Harbour. The proposed tidal lagoon dam would cross from here to iconic Cape Split across. Photo E. Kosters

Cornett, A., J. Cousineau and I. Nistor, 2013, Assessment of hydrodynamic impacts from tidal power lagoons in the Bay of Fundy. International Journal of Marine Energy, v. 1 p. 33-54.

I am an earth scientist. Understanding earth is essential for the well-being of our global society. Earth is fascinating, science is fascinating and a better understanding of both can help society forward. This blog attempts to make a contribution to raising awareness of these issues.
View all posts by earth science society →
This entry was posted in Energy, General geoscience, Nova Scotia and tagged Atlantic, Canada, Climate Change, earth science, energy, environment, geology, geoscience, Nova Scotia, oceanography, Science, Sea Level, tides. Bookmark the permalink.