The preamble to this reviews series, categorized as “Canadian Earth Science for @PMHarper”, is here.

Climate is warming, ice caps are melting, thinning and retreating. The Arctic ocean shows dramatic declines in summer sea ice every year, leading to increased development pressure (shipping, mining, tourism). After the all-time low of 2007, Arctic summer ice in 2013 was at its 4th smallest extent (well explained here). In Antarctica, however, sea ice has been on the increase in the last few years. This phenomenon is not yet totally understood, but may be related to the faster movement of Antarctic ice caps caused by them melting away from the bedrock below (but this is difficult to determine and not the subject of this review, see for a recent overview of this issue this page).

The ice conditions in the Arctic and Antarctic are related to the land configurations and both poles are total opposites: the North Pole is an ocean surrounded by land whereas the South Pole is a continent surrounded by ocean. Couldn’t be more different.

Polar maps of the northern and southern hemisphere. The arrows illustrate the main drift patterns, which are also responsible for sea ice dispersal and melt towards low latitudes. In the Arctic map, BG and TPD stand for Beaufort Gyre and Trans Polar Drift. The pink line corresponds to the 1979-2000 average maximum sea ice cover extent in March (northern hemisphere) and September (southern hemisphere), the months when sea ice is at its maximum in either hemisphere (illustration and caption from the article under review).

If you want to predict the future, you must understand the past. Geoscientists understand that as no-one else: our entire science is based on the principle that “the present is the key to the past and vice-versa”.

Why is it important to understand past sea ice conditions? Because sea ice “acts as an amplifier: it influences the energy budget at the surface of the Earth because it reflects a significant part of the incoming solar radiation (it is white) and because it limits the heat exchange between the ocean and the atmosphere” (quote from the article). Therefore: if long term (Ant)Arctic sea ice cover changes drastically, that will have an effect on long-term weather patterns and thus on climate.

Also: if a lot of sea water freezes and the sea ice cover expands, then the ocean becomes more salty, because salt doesn’t freeze (sea ice is not salty) and salt water is heavier than fresh water, so it starts to sink, and that affects ocean circulation and thus…. climate.

And: saltier water supports a different population of (micro)organisms than less salty water and most of these organisms breathe by absorbing CO2, so when you change the population, the amount of CO2 absorbed in the ocean changes and this …..  affects climate.

So – it would be really good to know how sea-ice changed over time so we can better understand our past climate changes and – eventually – better model what the future holds for us. 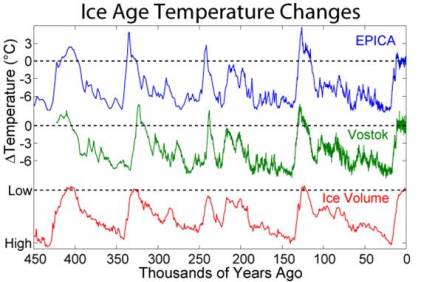 This graph illustrates how global temperature and polar ice volume (both on the vertical scale) varied over the last 450,000 years (horizontal scale). The reconstruction is based on the analysis of two ice cores (Vostok and EPICA) from Antarctica (image source here). The present day average temperature is set at 0 (zero) because the graph shows the deviation from the present. The symbol Δ means ‘change’ or ‘deviation’ so the vertical axis of the top 2 curves (blue and green) indicates the deviation from the average present-day temperature in Antarctica during the last 450,000 years. The lowermost curve (pink) indicates the estimated change in global ice volume over this time period.

This paper by Anne de Vernal and others is the introductory article of a 230-page special issue of the journal Quaternary Science Reviews of which they were the guest editors. The title of this article is also the title of the entire issue; this paper is the State-of-the-Art summary of this important new research field. The entire list of articles of this volume is here.

Problem: we only have direct observations of sea ice conditions from satellites since about 35 years and through a variety of other direct measurements since maybe the end of WWII. “Direct observations” are measurements of actual ice conditions. Which are difficult enough even with the sophisticated equipment of today: see this video for an impression of those challenges. If we want to know sea ice conditions from before WWII, we must find trustworthy and measurable indicators for sea-ice conditions. Such indicators are called proxies. Another word for proxy is substitute. To help you wrap your mind around this: imagine you couldn’t measure summer temperature, but you did want to know what kind of summer it had been. Imagine local beaches tracked the number of visitors each summer. If you collected the number of visitors for each beach, you would get an indication of which days were really nice, because there would be more visitors on hot days (you would have to account for holidays and weekends). Beach visitors would be a proxy for summer weather.

The most useful proxies for oceanic conditions are generally microscopic organisms. When they die, they fall to the ocean floor and become part of the sediment (some of them disintegrate or get eaten, but there are so many of them that a lot of them end up on the ocean floor). When we sample that sediment by taking cores off a research vessel, we can measure (later, in the lab) all kinds of properties of those organisms and these properties give us clues about the conditions (light, temperature, salinity) under which the organisms lived. 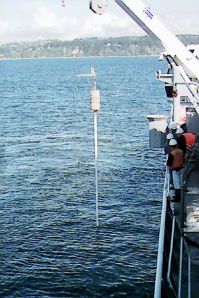 Left: A piston corer is launched over the side of a research vessel (image source here). Right: a core that’s cut open lengthwise to show finely layered sediment (image source)

But organisms on land also react to changing climate conditions. Trees grow faster or slower depending on the seasons and tree rings tell us. Dendrochronology (from Greek: ‘dendro’=tree, ‘chronos’= time and ‘logos’ = knowledge) is the scientific term for tree ring studies. Tree rings are excellent proxies. Trees grow one ring per year. The thickness of the rings tells you something about temperature and humidity conditions. Here is a link to the International Tree Ring Data Bank. It’s very important to be able to try to correlate ocean- and land-based proxy data.

When tree rings are widely spaced, climate was moist and trees grew faster than during dry years, when the rings are more closely spaced.

A little more than three years ago, a number of climate scientists agreed that sea-ice is an important but insufficiently understood climate driver. They got together for a workshop at UQAM in Montreal, home base of Anne de Vernal and decided to form a working group to share their sea-ice methods and results to see if they could improve our understanding of this phenomenon.

This volume of articles is an outcome of that exercise. What an accomplishment! You get together in the summer of 2011 and you get 18 articles published in one volume two years later. Wow.

Nine sea-ice condition proxies are identified in this paper and each is evaluated for its advantages and disadvantages. Some proxies are brand-new discoveries, some have been known for a few decades, but in general you can safely state that this is a 21st century field of research.

The authors emphasize that individual proxies cannot be used in isolation, but should be considered complementary to each other. In other words, if you want to draw conclusions with respect to past sea-ice conditions, you must use a combination of proxy data. This is because conditions vary regionally and between ocean and land; also the sea-ice thickness varies regionally and seasonally and this has an effect on organisms. Also: some organisms only live in either polar region. In addition, we don’t really know enough about how organisms react to changing conditions, so scientists must experiment with different proxies and compare the results. If the results line up, you’ve got working methods, you’ve got a tool.

Considering the current State-of-the-Art, the authors conclude that there is every reason to be confident that sea ice conditions during the last half million years can be confidentially reconstructed in the coming years using these different proxy methods. They admit that there are still many challenges and they aim to address those in the coming years. Altogether a very admirable result.

Predicting future climate is hideously difficult because there are so many factors that play into climate. Sea-ice is just one of those factors and it will take a few more years before that parameter can be built into future climate models. It’s science, after all: nobody promised it would be quick and easy.

It’s somewhat humbling to realize that this research was financially supported by PAGES (Past Global Changes, a research program funded by the US and Swiss National Science organizations and by NOAA) and by a grant from the European Union’s 7th framework programme. 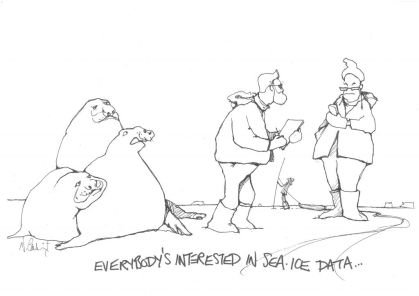 Cartoon from the Australian Department of the Environment / Antarctic Division. Image source here

I am an earth scientist. Understanding earth is essential for the well-being of our global society. Earth is fascinating, science is fascinating and a better understanding of both can help society forward. This blog attempts to make a contribution to raising awareness of these issues.
View all posts by earth science society →
This entry was posted in Canadian Earth Science for @PMHarper, climate change, General geoscience and tagged Canada, climate, Climate Change, environment, geoscience, Ice Age, oceanography, Quaternary, Science, Sea Level. Bookmark the permalink.