I wrote this blog post in November of 2014. I am reblogging it today, on the 10th anniversary of Hurricane Katrina. 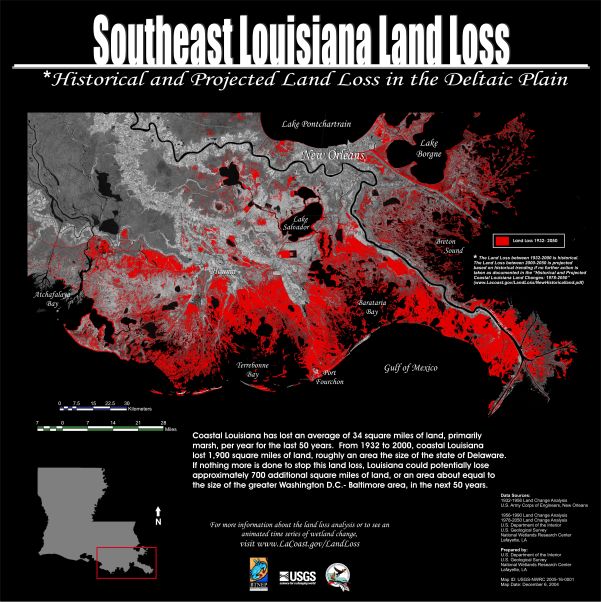 Is it the weather? No fewer than three long, detailed and well-researched articles in important media discussed the continuing story of increasing land loss in South Louisiana. The Globe and Mail’s Omar el Akkad wrote an insightful piece about disappearing Louisiana in the October 18 paper. The October 5 New York Times Magazine’s main article was a heart-sinking rendering of the fight of a few individuals against the sheer unwillingness of anyone to do anything to save the State of Louisiana. The New Republic Magazine ran an article on September 30. The latter two articles particularly focused on corruption.

All three articles were excellent, so why should I want to add anything?

I am a sedimentary geologist. I worked for the Louisiana Geological Survey from 1981 to 1986. Most of that time I worked on marshes – disappearing marshes. I was one of a team of about 6 young ambitious geologists, brought together under the Louisiana Geological Survey’s Coastal Geology Program, an initiative to inventory and understand the causes of the State’s land loss.  We were not the only official program working on these issues in the State at the time. We cooperated with the Louisiana Universities Marine Consortium (LUMCON), with scientists at Louisiana State University’s Coastal Studies Institute and with its Center for Wetland Resources. And that’s not counting the – Federal – US Geological Survey and the US Army Corps of Engineers. We worked on barrier islands, hurricane impacts, sediment budgets, marsh dynamics, nearshore currents, river dynamics, you name it.

Did we come up with new information? I think we did, if only for the sheer volume of new data that we gathered, analyzed and published, both as technical reports and as articles in internationally peer-reviewed scientific literature. There were a couple of new ideas and new insights, but I think it’s realistic to state that we mostly added lots of data and lots of detail to a story that was basically known and accepted by the mid 1960’s: the Mississippi Delta consists of ephemeral land because the river is – as Omar El Akkad wrote – a ‘side-winder’ and has been prevented from behaving as such for several centuries because of levee-building by its inhabitants (European colonizers). Thus, vast amounts of river sediment end up in 4,000 m water depth off the present-day river mouth (which is completely artificial) rather than being available for nourishing the delta plain’s marshes and bays (important nursery grounds for the fisheries) and its skimpy but crucially important barrier islands and beaches (I wrote earlier about the fragility of Gulf of Mexico barrier islands here). 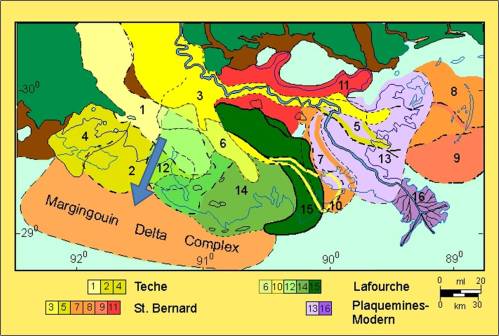 The Mississippi Delta is a side-winder. Depicted are the 5 main Holocene (less than 10,000 years old) delta complexes each with a number of individual delta lobes. The oldest delta complex, the Maringouin, has subsided and is below sea level. If the Mississippi would not be confined by artificial levees, it would have switched back to the Maringouin area by now: the present day Atchafalaya river and delta (blue arrow) occupies that position but river locks further north only permit it to carry about 1/3 of the total river load. The Atchafalaya route is 250 km shorter and significantly steeper to the sea than its current route and thus the preferred route from the river’s perspective. Image by Louisiana Geological Survey.

We knew this 30 years ago. We were never prevented from communicating these observations to the general public by the way. In fact, we were encouraged to do so and I clearly remember a TV crew in our core facility. Our director (who later became a USGS director) didn’t tell us what to say to the press – ever. The most vocal member of our team even got a New York Times Obituary when he passed away 8 years ago.

We did not think climate change back then. But you don’t even need rising sea level to declare an emergency: the Mississippi Delta is sinking because its sediment is waterlogged. Natural compaction squeezes the water out and makes the land sink. If you prevent the delta and the coastline from being nourished by its own sediment, the land loss due to compaction will be exponentially worse. If you allow the oil and gas industry to dig thousands of kilometers of canals, which disturb the delta’s hydrology, enabling salt water to penetrate landward, thus killing marshes and generating open water bodies, then you really have a problem. 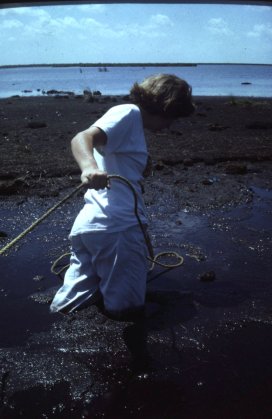 Author negotiating a disappearing marsh in the Mississippi Delta in 1984. This particular area was becoming infiltrated with salt water at the time, and this killed the fresh-water vegetation. It is now open water.

Hurricane Katrina slammed into Louisiana 9 years ago this summer (August 28). You’d think that that catastrophe would have led to some action. It didn’t. Some engineering companies got a few contracts. But soon after Katrina, people in power got really tired of scientists telling them why the land was disappearing. Louisiana State University even fired a tenured professor who told the truth, but had to pay him a hefty sum in damages a few years later. In the Globe and Mail article, Louisiana Governor Bobby Jindhal is quoted as saying that the oil and gas industry provides 60,000 jobs and therefore shouldn’t be the only actor pay the price for this catastrophe. He suggests maybe the fishers should pay a price as well. Really? Since when have fishers wealthy shareholders and corporate exit bonuses? That was just political distraction tactics by th governor. Because the truth is, you can’t allow the river to switch to its preferred location (the Atchafalaya course) because from Baton Rouge southward, the river would fill with sediment, New Orleans as a harbour would disappear and since it’s the lagest bulk port of the US, that’s unaffordable.

Is Louisiana an exception in the world? On the margin, I don’t really think it is. It’s true that Louisiana is an eccentric State. It is the only State in the US with a legal system based on the Code Napoleon rather than on the Anglo-Saxon Code and so all its legal experts are educated in Louisiana and this leads to professional inbreeding and corruption. That’s not a secret. So it’s a bit of a banana republic. It also has way too many very poor people, which is entirely unnecessary given its petroleum wealth, but there you go – that’s Louisiana.

After Hurricane Katrina, I put together a talk on the catastrophe. I gave that talk several times as a fundraiser. The money was for a public school in Baton Rouge that saw its population doubled in the first week of the school year (the hurricane hit on August 28) and had no funding for the additional required supplies. To this day, I am told what an eye-opener that talk was and that the story was in essence so simple that it was hard to believe nothing was ever done to mitigate the situation. Nice. Thank you. That was 9 years ago.

Is Louisiana exceptional in this respect? As a global society, we haven’t been willing or able to reduce green house gas emissions one bit, never mind overwhelming evidence that we must, if only for being at a serious risk of losing exponentially more land than is being lost in Louisiana. I can run off a list as long as my arm with examples of environmental hazards and disasters waiting to happen and elected decision-makers (aka politicians) sitting on their hands. Maybe it’s the weakness of democratic society or the general tendency of the public to stick its head in the sand and elect officials who are good at that too. Louisiana or the world, we will all still be discussing mitigation efforts when the water is at our lips. 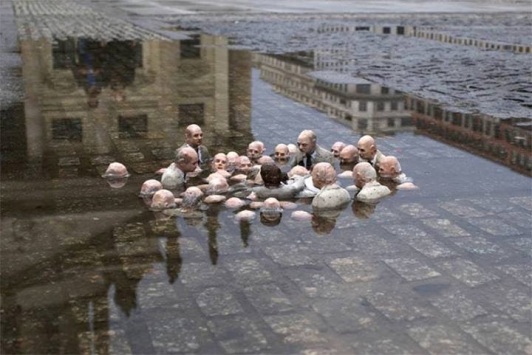