Canadian Earth Science for @PMHarper 8 – Earth in the firing range

The preamble to this review series is here. All reviews in this series are categorized as “Canadian Earth Science for @PMHarper” (see right hand column).

The people of Chelyabinsk didn’t see it coming. And we only know what it looked like because many Russians are in the habit of running dashboard cameras (dashcams): a flash, a loud detonation, shattered windows, 1500 panicky injured people (mostly because of flying glass). No casualties, thank goodness.  The Chelyabinsk meteor was about 20 m in diameter and could have done a lot more damage had it come down a few kilometers to the Northeast in the middle of the city of Chelyabinsk. Mustn’t think of it.

Less than two weeks after the Chelyabinsk meteor came down, Canada launched a ‘suitcase-sized’ satellite to track asteroids and space debris. That timing was completely coincidental of course. The main reason that launch got lots of media attention was the recent near-disaster in Chelyabinsk (a good write-up about the difference between meteors and asteroids is here). 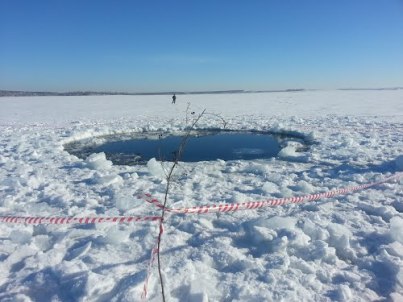 The last bit of the Chelyabinsk meteor came down on February 15, 2013 in the middle of solidly frozen Chebarkul Lake (image source).

The dinosaurs didn’t see it coming either, at least we presume they didn’t. The asteroid that hit Earth 65.5 million years ago on the Yucatan Peninsula was ca. 10 km in diameter. Most likely this hit was the main cause of the extinction of most – large – reptiles (such as dinosaurs), making room – eventually – for mammals, including ourselves. The idea (hypothesis) that a large asteroid could have hit earth and caused this particular mass extinction was introduced only in 1980, when it was considered utterly bizarre even by most experts. Like many utterly bizarre ideas, it proved to be pretty good, especially when the Chicxulub crater was actually found – and proved to be of the right age – 12 years later after the original hypothesis was formulated. 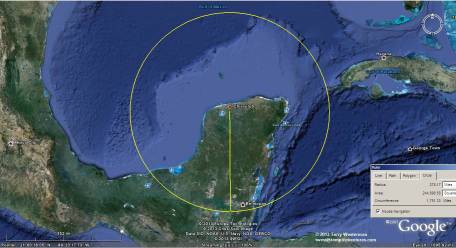 The Chixculub (meaning ‘tail of the devil’) asteroid hit in what is now the Yucatan Peninsula of Mexico, but Yucatan didn’t exist 65 million years ago: this was all ocean (image source is here).

The Manicouagan crater in our own Québec is a lot older than Chixculub: 214 million years. Known also as “the eye of Québec”, it became instantly recognizable as an impact crater after flooding of the Manicouagan river by Hydro Québec in the 1960’s. Now anyone can see it on Google Earth and many astronauts, including Canada’s own Chris Hadfield, have photographed it.

Manicouagan is the fourth largest impact structure on earth. No tectonic forces have influenced or altered it since its inception. The asteroid hit nearly 1 billion year old Canadian shield rocks. After this event, not much else happened geologically, other than the normal amount of erosion, but it never was an area with high mountains so that wasn’t a whole lot. Then the ice caps of the Quaternary glaciations swept across it, nicely cleaning off debris and making it even more easily visible, so it’s a a rather pure and unchanged impact crater.

184 confirmed impact structures pock mark our planet according to the Earth Impact Database, maintained at the University of New Brunswick’s Department of Earth Sciences, also the home base of John Spray, first author of the article under review here. The world’s oldest known impact crater is the 2.4 billion years old Suavjärvi in Russia. Very close to that one in age is the Vredefort crater in South Africa (2.023 billion years old), which is also the world’s largest at 160 km diameter and is – after all this time – easily recognizable on Google Earth and from space. There were likely lots and lots more asteroid hits during earth’s 4 billion year history, but because the earth’s crust is constantly recycled by plate tectonics, we will never know about them (there is no plate tectonics on the Moon, therefore we can see every crater it ever had).

Why study the geology of asteroid impact structures? These structures are studied because, other than for pure scientific curiosity, they host important minerals in large concentrations in a manner that is unique for impact structures. The city of Sudbury marks Canada’s most productive impact structure: it hosts one of the world’s largest nickel deposits . The Sudbury bolide had a diameter of 10 to 15 km and came down 1.8 billion years ago. Everyone knows that Sudbury is the metal capital of Canada, celebrated by their ‘big nickel’. Nickel is an essential mineral for hardening stainless steel. Recent research by Canadian geoscientists, however, favours a comet over an asteroid for the Sudbury impact (articles here and here).

So what happens when an asteroid hits earth? It depends on the size of the asteroid, so here we’ll limit ourselves to the ones that leave a crater of at least 3 km in diameter. Here is an excellent animation

The animation shows that such a big impact results in:

The Manicouagan structure has all the features of large impact craters. 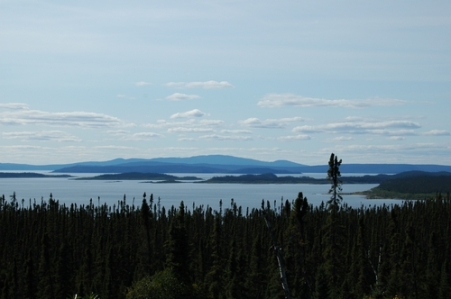 Manicouagan impact crater seen from the East. The reservoir is in the foreground, the central crater uplift (Mount Babel) is in the background. Panoramio image from Google Earth

The central uplift of the crater is what we now call Mount Babel. Mount Babel’s rocks consist of 1 billion year old basement rocks (gneisses) that were not affected by the asteroid. If you go to Google Earth, search for Mount Babel and tilt the image, you can easily see the central crater uplift that gives this mountain its name.

The article by Spray and Thomson focuses on new details about Manicouagan’s subsurface, revealed through the study of cores obtained by a mineral exploration company. What was learned? 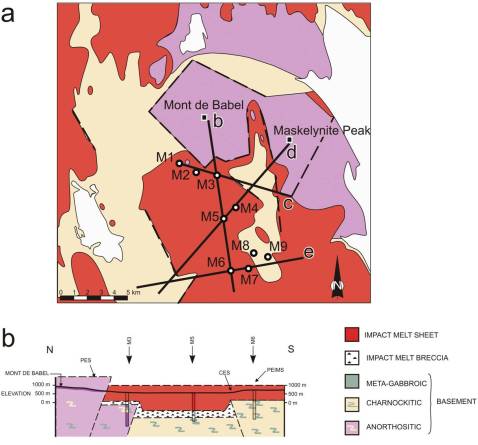 Above: Geologic map of the central part of the Manicouagan impact structure. Below: geologic cross section b (location on map above). Figure from the article by Spray and Thomson

The study revealed that the Manicouagan melt sheet has a variable morphology and is in places up to 1 km thick! This was a lot more than was originally estimated. Because the drill cores extended beneath the melt sheet, the researchers could observe that the basement rocks underlying it do show evidence of the impact – they have ‘shocked’ characteristics, meaning that the impact changed the nature of some of the minerals that make up these rocks.

The geologic cross sections show that there are faults alongside the crater (as expected). But these faults do not breach the melt sheet, from which the authors conclude that they were active before the melt sheet solidified. It’s possible that these faults run along lines of pre-existing (more than 1 billion year old) faults, but this cannot be proven. The faults are most likely a combination of re-activated pre-existing faults and faults newly created by the impact and occurred within 1000 years after the impact.

The longest core (M5) shows that the melt sheet isn’t uniform: it consists of three distinct layers of igneous rock (solidified melt) of subtly varying composition. Thus: as the melt sheet slowly cooled and hardened, different minerals settled at different depths according to their density: the melt sheet was fractionated, after it had been very well mixed and homogenized prior to it beginning to cool and solidify. Imagine that: an object of 5-10 km diameter hits very hard very old Canadian shield rock and instantly completely melts that rock as far down as 1 kilometer below the earth’s surface. Manicouagan is now only the second impact crater known to exhibit such fractionation (the other one is Morokweng in South Africa).

So yes, while the impact and the melting was instantaneous, faulting lasted much longer, although still pretty much instantaneous from a geologic time perspective.

The authors used all this information to try to figure out how exactly the central uplift structure originated. They present four different dynamic models but their information doesn’t allow them to decide which dynamics led to the structure’s features, leaving room for more research. 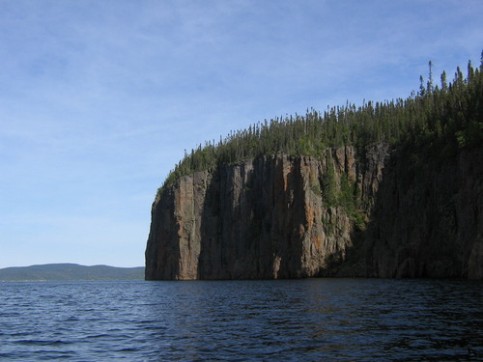 Earth is in the firing range and it’s important that we study the projectiles aimed at us in order to possibly mitigate a global catastrophe. But it’s also important to study existing impact structures in order to improve our understanding of critically important mineral occurrences associated with these structures.

And finally: whereas the 10 km diameter Chixculub asteroid was mostly likely the cause of the mass extinction that marks the end of the Cretaceous era (the era of reptiles, i.e. the dinosaurs), the 5-10 km large Manicouagan asteroid didn’t cause a mass extinction. Why? That is a topic for a different blog post.

I am an earth scientist. Understanding earth is essential for the well-being of our global society. Earth is fascinating, science is fascinating and a better understanding of both can help society forward. This blog attempts to make a contribution to raising awareness of these issues.
View all posts by earth science society →
This entry was posted in Canadian Earth Science for @PMHarper, General geoscience and tagged asteroid, Canada, Chelyabinsk, earth science, extinction, geoscience, impact crater, Manicouagan, mining, natural disaster, Science, space, Sudbury, Vredefort. Bookmark the permalink.