The Angular Unconformity (U) at Nova Scotia’s Rainy Cove, separating intensely folded and faulted early Carboniferous shales and sandstones of the Horton Group (labeled 1 below the unconformity) and gently inclined, undeformed sandstones and conglomerates of the Wolfville Formation (2) at Rainy Cove, Nova Scotia.

A New Year, a new blog banner! My banner pictures are from around Minas Basin, a stunning estuary on which shores I live (this to my daily surprise and gratitude). My previous banner picture and associated blog post is here.

The unconformity in this banner photo is exposed along the eastern shores of Minas Basin (location image at the end of this post). It is one of my favourite places to explore along these shores: there is so much to see here! Not only in the exposed cliff face, but also on the tidal flats that extend for several kilometers west of the cliff for about 2 hours (during low tide).

Here are two close-ups of the dashing exuberance of rock units 1 and 2: 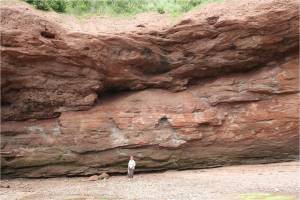 The contrast between the two units below and above the Unconformity at Rainy Cove. Left: intensely folded organic-rich shales and sandstones of the lower Carboniferous Horton Group (ca 340 million years old, unit ‘1’ in top photo). The image is about 2 x 2 meters. Right: massive, undeformed sandstones and conglomerates of the Wolfville Formation (unit ‘2’ in top photo – person for scale).

Close up of the Rainy Cove outcrop with the Angular Conformity

What is an unconformity, how does it come about and why is that interesting or even relevant? This is not an exhaustive coverage of the subject, so here I will discuss only the type of unconformity we see here, the “Angular Unconformity”.

Here is a schematic image of how such an angular unconformity is formed: 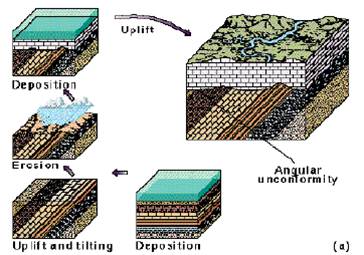 How an Angular Unconformity comes about (image source here). First (central panel, bottom of figure) sediments are deposited in a sea. The different colours and patterns indicate different kinds of sediments, such as sandstones and limestones. Next (lower left hand corner), the sediments, having become lithified, are uplifted and tilted during a mountain building episode. During and after uplift, the mountains are eroded down (central left hand panel) until the land surface is once again the bottom of a sea and new sediments are deposited on top (upper left hand panel). When those sediments are once again lithified and uplifted during a subsequent tectonic event, the end result is two juxtaposed rock formations, each with a different orientation (largest panel). There may be millions of years between the time of deposition of the first and the second set of rocks. The surface between the two formations (which shows as a line in a two-dimensional rock face) is the Angular Unconformity. The Angular Unconformity marks a gap in time from which rocks are missing at the outcrop. 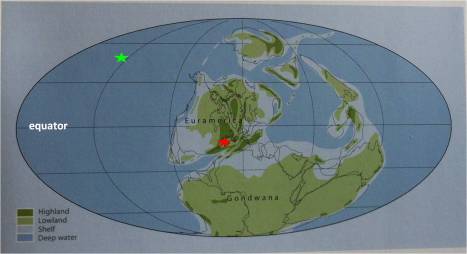 A. During the early Carboniferous, about 340 million years ago, Nova Scotia (red star) was located in a southern tropical latitude. Rich tropical forests bordered a shallow tropical sea, which was becoming narrower as the continents fused together to form the supercontinent Pangea (the green star is where Nova Scotia is located today). Thick piles of sediments of what we now call the Horton Group, consisting of organic-rich shales and sandstones, rife with unique fossil assemblages (especially at Blue Beach and Joggins), were deposited during this time in the quickly opening Maritimes Basin (image adapted from The Last Billion Years). 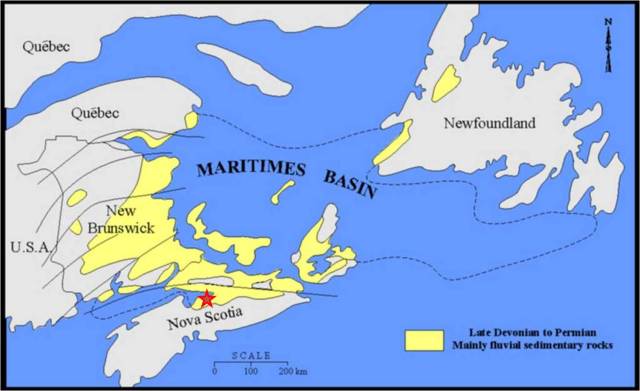 The Maritimes Basin. Rainy Cove is located at the Red Star.

B. By the late Carboniferous, ca. 305 million years ago, Pangea had formed and the sediments from that shallow, tropical sea had become sedimentary rocks. They were folded and faulted during the Appalachian-Acadian mountain building episode. These mountains rose as a result of the collision of these continents. Note that Nova Scotia is now solidly at the Equator. Image adapted from The Last Billion Years.

C. By the Permian, about 255 million years ago, things look fairly similar to the late Carboniferous, but Nova Scotia has yet again moved further north. It is still ‘highland’ and is eroding and shedding sediment to regions further away. Image adapted from The Last Billion Years.

D. By the late Triassic, ca. 215 million years ago, a crack is appearing in Pangea because of early break-up of the supercontinent. This process will eventually lead to the formation of the Atlantic Ocean. Nova Scotia is now at 150 N, the latitude where deserts occur, just like today, because of rising air masses (the tropics are wet because of descending air masses, the latitudes above and below that experience rising air masses and are hence dry). The former highlands are eroding and massive amounts of sediment are sent into these opening rift portions as alluvial fans. These are the sedimentary rocks of the Wolfville Formation, which overly the unconformity (unit 2 in the top photo).  Image adapted from The Last Billion Years.

The Angular Unconformity at Rainy Cove represents a gap in the geologic record, a period of ca. 135 million years. The early Carboniferous sediments were deposited ca. 340 million years ago, the late Triassic sediments ca 215 years ago: no rocks of 340-215 million years old are found here. Sediments of this time interval exist elsewhere: all of Prince Edward Island consists of Permian sedimentary rock (298-252 million years ago), deposited while sedimentation bypassed what is now Nova Scotia, which was being eroded and whittled down.

Now look again at the paleogeographic maps above. Opposite (future) Nova Scotia are NW Africa and SW Europe. This Carboniferous basin extended along the stitch line (called ‘suture zone’) of these colliding continents. When the future Atlantic Ocean started to form, rifting took place along some much older zones of weakness in the earth’s crust. There are very similar sequences on what is now the other side of the Atlantic Ocean. Here is an example in SW Portugal.

Carboniferous-Triassic Angular Unconformity at Telheiro Beach, SW Portugal. This sequence is identical to the one at Rainy Cove. Image by Joao Duarte (@JoaoCDuarte)

Why is this interesting or even relevant?

Reconstructing such large-scale processes helps us understand the evolution of the earth and its tectonic activity. These processes have not only contributed to what our landscape looks like, they also help us understand the occurrence of our own natural resources and those in other regions. Opening and closing of oceans and associated mountain building processes explain the occurrence of much of our earth resources. Outcrops such as these help us understand rocks in the subsurface too. For example, the article by Leleu et al, cited below, was the result of a study that looked at the Wolfville Formation as an analogue to hydrocarbon bearing rocks in the subsurface of the North Sea.

Minas Basin, Nova Scotia (images Google Earth). Left: overview image – the green arrow points to the location of Rainy Cove. Right: same image, zoomed in. The Rainy Cove outcrop runs more or less North-South. It’s early morning in this image because the cliff is in the shade. The tide is fairly high, because the tidal flats aren’t all the way exposed, but a portion of the rocky tidal flat is exposed, showing intricate structures in the exposed rocky beach.

I am an earth scientist. Understanding earth is essential for the well-being of our global society. Earth is fascinating, science is fascinating and a better understanding of both can help society forward. This blog attempts to make a contribution to raising awareness of these issues.
View all posts by earth science society →
This entry was posted in General geoscience, Nova Scotia and tagged Atlantic, Canada, Carboniferous, continent break-up, earth science, energy, evolution, geology, geoscience, Minas Basin, Nova Scotia, paleogeography, sedimentology, tectonic, Triassic. Bookmark the permalink.