The preamble to this series is here. All reviews are stored in the category “Canadian Earth Science for @PMHarper” (see right hand column).

The world is warming up and humanity is the cause: we have become a geologic force, and have brought in the age of the Anthropocene. As President Barack Obama stated so eloquently in his commencement address at the University of California at Irvine last week “the question is not whether we need to act; the overwhelming judgement of science, accumulated and reviewed over decades, has put the that to rest. The question is whether we’re willing to act.”

There are numerous possibilities for action, depending on technology and political will.

The carbon dioxide content of our atmosphere now stands above 400 ppm (parts per million) and even if we all had the best intentions and started to intervene tomorrow, we simply can’t stop burning fossil fuels right away, so atmospheric CO2 will continue to rise for a long time to come.

What if we captured some of that carbon dioxide at the source (i.e. industry) and put it back in the ground before it reaches the atmosphere, thus slowing down the rise in atmospheric CO2? This process, known as Carbon Capture and Storage (CCS) – has been tackled by scientists and engineers for only just over 20 years, i.e. ever since the risk of global warming first began to be taken serious by a handful of people. Imagine that everyone had been a climate-change skeptic back then, we wouldn’t have known anything about this subject today! Here is the official (and excellent) Canadian CCS site.

Over the years, I have heard more than one climate-concerned citizen say that we should ‘just put all that CO2 back where it came from’. If only it was that simple, the process would have been routine now, pretty much like taking lead out of gasoline or CFCs out of spray cans.

This article reviews the State of the Art of our knowledge about CCS in deep saline aquifers. That knowledge is impressive but also discouraging. There are still so many unknowns!

So what, exactly, are the challenges?

First: there are only a few possible properly contained subsurface reservoirs for CCS: 1) depleted oil and gas fields, 2) unminable coal beds and 3) deep saline aquifers. This review focuses on this last and preferred option.

Why not the first two options? CCS would be the most efficient and effective if every major (energy) industry (a ‘point source’) could inject CO2 in the subsurface. But not all of Canada’s heavy industry nor its powerplants are located above oil and gas fields or unminable coal seams. Some depleted oil and gas fields are already filled with re-injected CO2 as part of the process of producing the field (a process called ‘well stimulation’). So while those first two options are heavily researched and tested (see for example here and here), it would be better if we could access a rock compartment that is pretty much present everywhere.

Deep saline aquifers are present just about everywhere and are therefore the preferred choice. 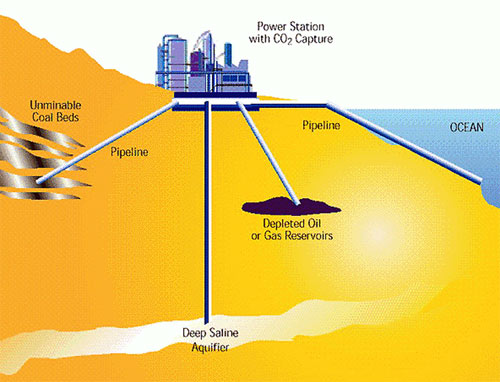 This diagram shows the different possible natural reservoirs for CO2 storage (source of figure). There is no vertical scale indicated, but deep saline aquifers are located at close to 1 km depth, far below the aquifers from which we draw water for human use.

It is important to note that CO2 occurs naturally in deep saline aquifers (and has been plentiful in such aquifers for millions of years) so that re-injecting it in such an environment mimics a natural process. Naturally occurring chemical reactions (given the right temperature and pressure) in such an environment may turn CO2 into limestone and/or related minerals , but because pressure in these aquifers is very high (because they occur at great depth), CO2 often stays dissolved in the water.

CO2 (or any other gas) will only stay in the aquifer-reservoir that reservoir is properly sealed. The seal is provided by surrounding rock that is impermeable. A typical example of impermeable rock is salt or gypsum. But even such rocks have cracks and/or are broken up by faults. Cracks and faults can lead to leakage from the reservoir rock. This also is a completely natural process, but if we want to store CO2, we want it to stay in the reservoir and not leak back to the atmosphere.

Gypsum outcrop, riddled with smaller and larger cracks. Yet gypsum is most of the time an excellent reservoir seal.

Another potential risk is that dissolved CO2 can change the acidity of the deep aquifer. A different acidity may cause certain trace elements, such as the toxic elements lead and arsenic, to become mobilized and travel to the shallow aquifer (which is what we use for drinkwater and irrigation). We don’t want that either.

Also, you must be able to take into account that certain effects of CO2 injection will only be noticable far away from the injection site, whereas other effects are realistic near the injection site. The difference is explained by the the architecture of the subsurface. “Architecture” refers to the manner in which the rocks are layered, tilted, folded, faulted and (re)cemented. Each rock formation has a completely unique architecture (this is what keeps geoscientists busy). These effects are called ‘near-field’ and ‘far-field’ effects. 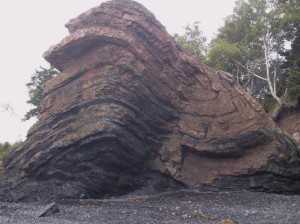 If we store CO2 in the deep subsurface, we want it to stay there ‘forever’. How long is forever? Not a single geologic formation stays unchanged forever, but some experience millions of years of utter boredom. Can we predict the rock formation with the most boring future? Keep in mind that the earth cannot things boring forever. Our planet bubbles and burps and sighs and heaves according to the 2nd law of thermodynamics, which dictates that every system always turns to maximum randomness. In the end, any sort of reservoir will come undone.

Long term geologic processes can affect deep groundwater flow significantly, a concern that has affected the research on deep storage of nuclear waste to the point where that has just about become a dead end. And – really weird question, but let’s face it: if we would be able to take significant amounts of CO2 out of the atmosphere, do we want to be able to put it back when the next ice age hits (if humanity is still around)?

It’s these sort of questions and uncertainties that have been the topic of intense research and it’s this research that is reviewed in this article.

How do you research this? Ideally, you should sample and research the reservoir itself, but that’s more or less impossible because it’s so deep. There are two other ways: 1) carry out experiments, in a lab or in super-controlled natural situations and 2) through numerical modeling and simulations (thank goodness for ever more powerful computers). This research is complicated and expensive. The real-world experiments have to run a long time before yielding data that can be understood and extrapolated.

This is what makes this article both discouraging and impressive: such fantastic research and yet so many remaining questions. The author has defined a number of knowledge gaps. He begins by stating that the state of understanding is very immature because quantitative research is no more than 10 years old. Laboratory experiments that study the interaction of minerals and CO2-saturated brines are few and far between. Most numerical models are still very simplistic (that’s mostly determined by not having sufficiently sophisticated computers, we still need better ones, yes we do).

But he ends on a positive note: despite the above, the possible environmental impacts of geologic storage of CO2 in deep saline aquifers on shallow groundwater resources appear to be low. Given proper understanding of the reservoir, leakage of harmful elements or of CO2 itself, can be minimal.

So: while more research is needed, the technology is promising. Let’s hope it will take off.

Writing a review article is a big job. The job that led to this article was commissioned by the Geological Survey of Canada. The result is a body of work that serves the interest of all Canadians.

I am an earth scientist. Understanding earth is essential for the well-being of our global society. Earth is fascinating, science is fascinating and a better understanding of both can help society forward. This blog attempts to make a contribution to raising awareness of these issues.
View all posts by earth science society →
This entry was posted in Canadian Earth Science for @PMHarper, Energy, General geoscience and tagged aquifers, Canada, CCS, climate, Climate Change, CO2 sequestration, earth science, environment, geology, geoscience, hydrogeology. Bookmark the permalink.