That must have been a lovely stay, a “short week” (I’m quoting the Globe and Mail) with your family near the small village of Cheverie on the shores of our beautiful Minas Basin. As a proud constituent of Mr. Brison, I know the location of his house well, as it is the site of his annual constituency BBQ, always a terrific party with great music on that magic spot, the big field on top of the cliff overlooking the basin.

You must have frequently walked down to the beach at the end of the road (maybe you even went for a swim during those 2 hours around high tide) and I hope you took a moment to ponder the unusual sight there of a small outcrop of brilliant white rock shown in this picture with the steeple of the Cheverie church above it:

This is an outcrop of anhydrite, which is a form of gypsum, if you wish. The gypsum belongs to what geoscientists call the ‘Windsor Group’, an assemblage of limestone, gypsum and salt that crops out (geoscience term for: ‘visible to the human eye without digging or excavating’) in the area around Cheverie. I’m sure you saw these outcrops on your drive to your holiday location. Nova Scotia has a lot of gypsum, an indispensable building material. The gypsum mine between Scott Brison’s house in Cheverie and his constituency office in Wolfville ran for about 80 years until it closed recently, one of the many victims of the global recession. It’s hard to get that gypsum out, as it needs to be shipped out of a basin with the world’s highest tides, hence the time window for ships to come in, load and turn around, is very short. Ingenious process technology was invented to meet those conditions, some of which you can still see at the wharf in Hantsport, but that ingeniousness made the whole process quite expensive, explaining why it recently collapsed.

Gypsum precipitates when seawater evaporates in shallow seas in hot wet climates. The gypsum (or anhydrite, to be correct) near Cheverie precipitated in shallow seas more than 300 million years ago, when what is now Nova Scotia was located more or less at the equator. Yes, we moved up quite a bit! Oddly enough, just below that gypsum are rocks that are full of organic material, even coal. Coal is fossil plant material and becomes preserved in hot wet climates, a situation that is diametrically opposed to the one in which gypsum precipitates. There is not yet a good explanation for this sudden climatic about-face. During hot and wet conditions, wide rivers ran through a lush green landscape, in which thick peat bogs (our future coal) accumulated. It was very fertile ground, where the first amphibians set foot on land in search of abundant food. Right in front of Scott Brison’s house is a surface, representing a fossil river bank, full of indentations that mark the location of of fossil trees: 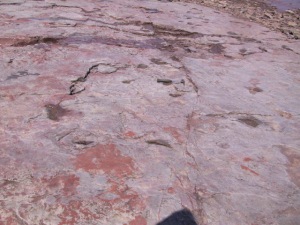 Amazing, isn’t it? There are lots more amazing rocks along that same shore. I’m sure you saw the red rocks as well. They are the deposits of wild rivers that ran through a near desert environment in the middle of a gigantic continent. They look rusty red and that’s exactly what explains their colour: rust. The iron in these sediments became oxidized due to exposure to air. There was no sea or ocean anywhere at that time. These rocks are more than 200 million years old and Nova Scotia was located at about 15 degrees North at the time, the same latitude as many of the world’s great deserts now. It was a bleak time in the history of the earth, because the planet had just experienced a massive extinction which did away with 95% of all life. You won’t find a lot of fossils in those rocks, but there is evidence of some of the first dinosaur-like creatures in them. Most of these have been found along the north shore of Minas Basin near Parrsboro (where the lampposts are decorated with dinosaur lights).

And every day when you woke up, you looked across this magnificent basin and saw that big Cape on the horizon. That’s Cape Blomidon, a named that was morphed from ‘Blow Me Down’ (there is a place on the West coast of Newfoundland that also has that name, by the way). You can’t see a lot of detail in Blomidon from Cheverie, but maybe you took a day trip around the basin and visited Blomidon Provincial Park or even hiked Cape Split. I insert a picture of Blomidon here (taken on a very cold overflight one winter to photograph the ice in the basin):

There is solid looking rock on top of Blomidon, very different in colour and texture than the underlying red rocks. The solid looking rock on top of Cape Blomidon is basalt. Basalt is definitely not a sediment. Basalt is extruded from the earth’s interior during times of so-called continent break-up. Pretty much like what happens in East Africa today where the Great Rift Valley marks a tear in the continent. The basalts of Cape Blomidon are about 200 million years old and mark the time when the Atlantic Ocean began to form.

And in between all this is loose sediment that may still become rock some day in the geologic future: the tidal sediments of Minas Basin and its eastern extremity Cobequid Bay, exposed only for a few hours, as shown here:

. Did you go and watch the tidal bore somewhere? I’m sure you learned about the efforts at generating electric power from in-stream tidal turbines. It’s not going as fast as everyone had hoped, but that’s because nature continues to be a difficult one to work with. I do hope that we’ll manage to harness the tides one day, so that we can run on cleaner energy while maintaining good stewardship of our unique environment. We should be able to do better than previous generations, who logged the place bare and hid the nutrient-giving marshes around the basin behind dikes. They are now a cherished cultural phenomenon, those dikes, but they do wreak havoc with ecosystem balances.

Did you come across a wonderful book called “The last Billion Years” (http://www.nimbus.ca/Last-Billion-Years-The-P5316.aspx) in Scott’s library? It tells the story of the geologic history of the Maritimes for the general public. I don’t mean to be disrespectful, you are not an average member of the general public, but you may not have a geosciences background, so I do recommend it highly.

In closing, I hope that you will tell many of your important relations here in Canada and, starting later this year in the UK, about our wondrous, amazing, natural environment which supported our economy, but – in a modern world with different economic drivers – also caused our decline. Raw resources alone are not sufficient to build a long term stable economy, value-added products is what builds a better chance at longer term prosperity. In the near future, we can hopefully capitalize somewhat on our unique geoheritage through the development of geoparks, building on the fame of the Joggins Fossil Cliffs World Heritage Site (http://jogginsfossilcliffs.net/)

With best wishes for a bright future on the other side of that ocean of which you observed the very beginnings right here on your holiday,

I am an earth scientist. Understanding earth is essential for the well-being of our global society. Earth is fascinating, science is fascinating and a better understanding of both can help society forward. This blog attempts to make a contribution to raising awareness of these issues.
View all posts by earth science society →
This entry was posted in Nova Scotia and tagged anhydrite, basalt, Blomidon, Carboniferous, Carney, Cheverie, continent break-up, extinction, geology, gypsum, Minas Basin, Parrsboro, sedimentology, tides. Bookmark the permalink.