Dreikanter: The biography of my favourite ventifact

This is my favourite ventifact, a real Dreikanter, a German word meaning ‘three sider’. This vernacular term became the formal label for a ventifact with three sides. My Dreikanter is a well-sorted pure quartz sandstone of a uniform grain size. It weighs 11 kg and shows cross bedding.

I found this beauty in 1978 in a sand pit just North of the small town of Lathen, located along the Ems River in northwestern Germany, close to the border with the Netherlands. The sand pit is still there (52o52’40” N, 7o19’25″E. This area was part of my MSc thesis research field area. It was a dark, grey day and I wasn’t feeling particularly upbeat about where my thesis was going, so spotting this stone lifted my spirits and I decided to take it with me. Unfortunately I don’t have a photograph of the “outcrop”, the wall of the sand pit. I plucked it out of a layer of many such stones (but none as pretty as this one), representing a Weichselian age periglacial desert pavement.

A periglacial desert pavement forms in the vicinity of a major ice cap, often on the edge of the outwash plain of such an ice cap. Two processes contribute to the formation of a desert pavement: frost heaving forces larger-size rocks to the surface and strong katabatic winds coming off the ice cap selectively remove finer sands and silts (easily done as there is virtually no vegetation), leaving a surface riddled with stones. Because the winds are generally from consistent directions, the stones are sand-blasted from those directions, over time shaping the stones into two-, three- or even four-sided ventifacts (literally meaning ‘made by wind’). The sand blasting often also leaves the stone smooth and shiny, a phenomenon that’s called ‘desert varnish’.

The process is illustrated here: 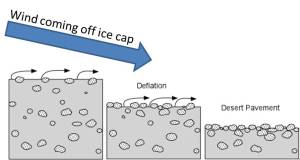 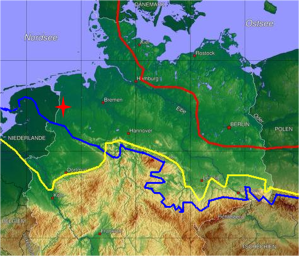 My Dreikanter was transported from somewhere in Scandinavia to its final resting point at the red star by the kilometers-thick ice mass of the Saalien glaciation. When the ice retreated, it left it there. I can’t tell you what happened during the subsequent Eemian warm period here, because I no longer have my field notes from those years, and so I can’t tell you if there is any evidence of soil formation at this locality.

But during the Weichselien glaciation, a desert pavement formed in this area. There are a lot of sand pits in this area and I visited quite a few of them during that field summer and almost all of them showed this thin desert pavement, riddled with ventifacts, and covered with fluvio-eolian deposits of the late Pleistocene River Ems (little or no vegetation in this periglacial desert, so plenty of opportunity for river dune formation), as was the case in this sand pit.

Where did my ventifact come from? I don’t really know, because at the time that wasn’t part of my research. Dedicated researchers have reconstructed individual Scandinavian ice streams on the basis of rock component proportions. Scandinavia is dominated by basement rock. A bit of searching leads me to believe that there is a good chance that my ventifact was plucked off an outcrop of the sandstones of the Vassbo Formation of southern Sweden (Wallin, 1990). The Vassbo Formation represents shallow marine and eolian deposits on the edge of the Baltica craton, which was located at halfway between the equator and the South Pole at the time of deposition. These are enigmatic sandstones, very uniform in grain size, having been deposited over vast shelf areas around continents that consisted of bare rock. Vegetation wouldn’t come in for another 100 million years. By the time my ventifact was plucked off its outcrop, the Baltica craton had migrated from about 45o S to about 60o N (over a period 500 million years, and not in a straight line) and then this piece (not yet a ventifact) traveled south, incorporated in the ice mass, for about 1000 km in – maybe – 10,000 years before coming to rest on the north German plains, where it was subsequently given its quirky shape by the relentless winds of the last ice age over a period of a few thousand years.

About 11 years ago, we moved to Nova Scotia and I took my ventifact with me. By complete accident, our house stands smack on top of a tiny alluvial fan, deposited under a ridge on the edge of the Minas Basin, an arm of the Bay of Fundy. The Holocene onlap is halfway up the back yard: Holocene marine sediments lap on to the gravels of the no longer active alluvial fan. An alluvial fan……….. in an area that was once under a thick ice cap……………. And yes, dozens of ventifacts surfaced when we excavated for the expansion of our house.

My Scandinavian ventifact has found a place in our Nova Scotia garden as the head of a not very convincing Inukshuk.

Now, I just wonder, if a future Acadia University geology student, say, 100 years from now when everyone will have forgotten that we ever lived here, starts an honour’s research project on ventifact rock types populating this alluvial fan, what is she going to think of this one?

I am an earth scientist. Understanding earth is essential for the well-being of our global society. Earth is fascinating, science is fascinating and a better understanding of both can help society forward. This blog attempts to make a contribution to raising awareness of these issues.
View all posts by earth science society →
This entry was posted in General geoscience and tagged Climate Change, dreikanter, earth science, geology, geoscience, Ice Age, Quaternary, Science, ventifact. Bookmark the permalink.

1 Response to Dreikanter: The biography of my favourite ventifact