Yesterday, on April 20, 2013, an earthquake struck in China’s Sichuan province. Because this is the blog of an earth scientist, I’ll give you the link to the USGS’s report: http://earthquake.usgs.gov/earthquakes/eventpage/usb000gcdd#summary . This write-up is excellent and that’s how we know that this earthquake, together with a bunch of other deadly Chinese earthquakes, occurred on the Longmenshan fault belt, a thrust zone marking the eastern margin of the India-Asia collision zone. So much for tectonics.

The result of this week’s earthquake was a death toll of at least 150, and the number of injured numbers at least 5,700.

–          International offers of assistance have been received.

–          Rescue efforts are hampered by landslides, some of which block crucial roads.

I copied the above observations from some of the write-ups on websites of reputable press agencies, it doesn’t matter which ones, they are all the same. And they are the same for each major earthquake that strikes.

And nothing changes. Because it’s not really the earthquake that killed people, it’s the buildings that collapsed on top of them.

Granted, this is a vulnerable area. Granted, it is densely populated, but it has about the same population density as equally vulnerable greater Los Angeles and greater San Francisco, where the death toll from the 1994 Northridge and Loma Prieta earthquakes was minimal: less than 100 casualties for each.

Reason for the difference in casualties between San Andreas Fault and the Longmenshan earthquakes? Building codes. Correct that: adherence to building codes.

China is an undemocratic country with an opaque system of government. I am not an expert on China, but one doesn’t need to be an expert to know that corruption is rampant. The 2008 Sichuan earthquake killed 68,000 people, many of whom were children who were killed in their schools. The death of a child is an inconceivable tragedy, even more so in China because of its one-child policy.

Last Fall, I visited the Hirshhorn museum for modern art in Washington DC, to see the Ai Weiwei exhibit “According to What?” (http://www.hirshhorn.si.edu/collection/ai-weiwei-according-to-what/). Ai Weiwei is one of the world’s most highly recognized modern artists, commonly known as a “Chinese dissident artist”. His art is confrontational, although you wouldn’t always know that without a detailed explanation. I saw his “Sunflower Seeds” installation in the Tate Modern in London in 2010 and while I was mesmerized by the work itself, it was only through absorbing the extensive documentation that I understood its message. You can have long philosophical discussions about whether art should have a message. That’s not the point of this post. Ai Weiwei’s art has a message, and that is intentional.

Part of Ai Weiwei’s “According to What” exhibit was inspired by the 2008 Sichuan earthquake. Those artworks are more thought-provoking and bone-chilling than any scientific information or statistic you would want to absorb. I want to discuss two works here:

“Snake Ceiling” is made of hundreds of grey and green school backpacks, commemorating  the thousands of children that died in the earthquake. Remember that many children were in school at the time the quake hit. They lost their lives because school buildings were constructed poorly, the construction industry is in the pockets of politicians and vice versa and corruption is rampant. Their deaths were unnecessary. You can’t walk under that massive, aggressive snake without feeling helpless, angry, and intensely sad. Rationally knowing that thousands of children lost their lives is not the same as being confronted with all those backpacks, each representing a happy child that danced to school that morning, before being lost forever, leaving broken lives and futures.

Another work addressing the same corruption problem consists of an enormous pile of elegantly and minimalistically arranged rebar (photo below). Every single one of these rebar pieces was salvaged from collapsed buildings, brought to a recycling place and straightened out for the artist. Together, they form a monstrous monument to corruption and needlessly lost lives. 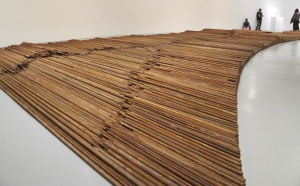 There were a lot more works addressing China’s corruption and censorship at this exhibit. My general feeling was – if those of use who try to communicate the importance of science to the public would only have access to more artists, if we cooperate more with artists, would our message not improve significantly?

I am an earth scientist. Understanding earth is essential for the well-being of our global society. Earth is fascinating, science is fascinating and a better understanding of both can help society forward. This blog attempts to make a contribution to raising awareness of these issues.
View all posts by earth science society →
This entry was posted in General geoscience, Geoscience and Art, Natural hazards and tagged Ai Wei Wei, Art, China, earthquake, geoscience, natural disaster, natural hazard. Bookmark the permalink.