My favourite periodical is the New York Review of Books. It is a high-brow magazine that contains in-depth articles by outstanding writers and thinkers on a range of topics from fundamental physics to poetry and everything in between.

And excellent article in two parts – in the December 8 and December 22 2016 issues – discussed the Exxon climate change scandal. In case you missed it: Exxon (Exxon-Mobil since years, but generally known as Exxon) has known since 30+ years that our massive fossil fuel burning causes global warming, sea level rise and untold droughts and other catastrophic climate disruptions. The company chose to hide this information from the public and from policy makers and even financially support(s)(ed) climate change denial institutions and individuals to counter the growing scientific literature on the subject. All in their own financial interest, of course.

Exxon is now taken to court by the Rockefeller Family Fund. The accusation is that the company has failed to disclose the business risks of climate change to their shareholders and that this constitutes consumer (or securities) fraud. The articles in the NY Review present the evidence and the cover-up.

But that’s not a reason for writing this blog post. The reason is that in the December 22 article, reference is made to the man who conceived of what we now call sequence stratigraphy: Dr. Peter Vail. Quoting the article: “The company tried to use the work of one of its most celebrated earth scientists, Peter Vail, to predict how alterations to the planet’s surface made by the changing climate could help it discover new deposits of oil and gas”.

Readers of the New York Review of Books are knowledgeable intellectuals, but I decided that this paragraph was worthy of an annotation. So I sent the following to the Editor of the New York Review of Books. I consider this a bit of science communication, so I’m sharing it here because I’m curious whether my followers (geologists or non-geologists) find what I wrote correct / understandable / interesting / insightful. At this point, I don’t know yet whether the NY Review of Books will publish it, but that’s neither here not there. I have edited my original submission minimally and have included illustrations in this version. Here it is:

Reservoir rocks are rocks with the right porosity and permeability, enabling (natural) storage of fluid or gaseous hydrocarbons (oil or gas). Source rocks are rocks that contain the right amount of organic matter and that have been “cooked” enough – i.e. experienced high enough temperature and pressure deep in the earth for a sufficient amount of time – for that organic matter to become transformed into oil or gas. Organic matter is the remains of living organisms, either plants or microscopic animals. Under certain conditions, organic matter doesn’t oxidize & disintegrate into the air (like the dead leaves you rake from your lawn in the fall) but becomes incorporated in sediments. Coal is simply dead plant material, “cooked” and incorporated in the rock record in the place where it originated (a swamp). Natural gas is mostly “cooked coal”. Oil is the end product of microscopic organisms that lived and died in oceans (and rarely in lakes) over time, then became buried and “cooked”. Oil and gas are mobile and will move under varying pressure conditions, thus ending up in reservoir rocks where they may stay trapped if other conditions are right. Petroleum geologists look for reservoir rocks and they need to understand the origin and architecture of these rocks. They also must understand and predict where and during what time interval the best source-reservoir rock combination may become preserved.

In 1977, the American Association of Petroleum Geologists published a bombshell. Memoir 26: “Seismic Stratigraphy – applications to hydrocarbon exploration” laid out a revolutionary new method of analyzing seismic data. Recall that this was three years after the oil crisis at a time when the western world and the US in particular was extremely panicky about its dependence on foreign oil. Anyone who could improve the prediction of hydrocarbon reservoirs in order to improve domestic production was going to be popular.

The cover of AAPG Memoir 26

Only oil companies have the financial resources and the motivation to collect seismic data. For Exxon to allow for their best kept secret – this new methodology – to be published in the public domain was mind boggling. The other mega company at the time, Shell, was humiliated and baffled by the insights presented in this publication.

Until the time of this publication, sedimentary geologists had developed models for understanding the rock record that relied on much smaller scale, i.e. field-based data collection. Seismic data reveal the architecture of sedimentary systems at the scale of tens or hundreds of kilometers, whereas field exposures are a few hundred meters at best. This is a difference of orders of magnitude, comparable to the difference between a standard land-based telescope and the Hubble when you want to study the universe.

What the Exxon team, led by Pete Vail (a bright, boyish man gifted with contagious enthusiasm ), showed was that the location and preservation of recognizable packages of sedimentary rocks (“depositional systems”) depended on the position of sea level at any point in geologic time. Although much research had hinted at such a relationship, it had never before been demonstrated with so much conviction. So this was revolutionary but there was more: Pete Vail’s team claimed that these sea level changes were global in nature and they subsequently produced a global sea level curve showing sea level movements through time to substantiate their claim. 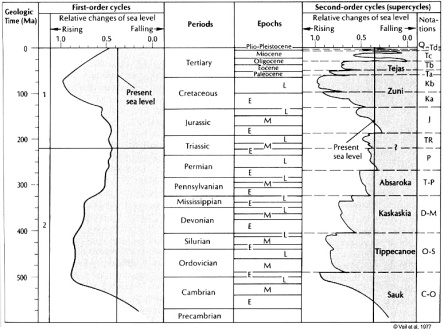 Geologists had accepted for a long time that global sea level danced up and down through the ages, but since sedimentation is capable of overwhelming the effects of sea level regionally, the idea that you could trace global sea level movement by analyzing sedimentary sequences seemed too ambitious. In addition, studying rock outcrops (or drill cores, for that matter) doesn’t give us a clear indication of time horizons. Our colleagues the paleontologists help us distinguish time by detailing small evolutionary changes in the fossils in the rocks, but we don’t actually see it. Yet Pete Vail demonstrated that variations in wiggly lines on seismic images represented time horizons, another revolutionary idea. Here is a video (one of a series) where he explains how he came up with that idea.

What followed were about 20 incredibly exciting years of research in sedimentary geology (I was one of many contributing to this field it in my own small way as a government and academic researcher) in which we sedimentary geologists started to look at sedimentary rocks from a completely different perspective. Our understanding of the timing and deposition of sedimentation expanded exponentially during these years. This knowledge revolution resulting in a methodology that we now call Sequence Stratigraphy. During that same period, roughly until the mid to late 1990s, the global discussion on climate change was marginal at best. Basically we lived by the paradigm that development required energy and that our field of expertise contributed to finding that energy even if we studied for example a thin, recently deposited sedimentary package. We worried about Peak Oil and about pollution but not about burning hydrocarbons as a factor in climate change.

Of course, as the decades progressed, the understanding of global sea level changes as a reflection of global climate changes also evolved, as did the understanding that Homo sapiens was becoming a geologic force itself, capable of changing climate. That’s where knowledge expansion is taking place now. Such is the nature of scientific progress.

So yes, the sentence in the article was correct “alterations in the planet’s surface, made by changing climate, can help discover new oil and gas deposits” but the road to that insight was long and the original objective was not climate study.

Of course, this doesn’t change the fact that Exxon brass, once they realized the importance of these findings and the potential damning consequences for the future of their business, took part in a massive cover-up, as outlined in these articles.

I am an earth scientist. Understanding earth is essential for the well-being of our global society. Earth is fascinating, science is fascinating and a better understanding of both can help society forward. This blog attempts to make a contribution to raising awareness of these issues.
View all posts by earth science society →
This entry was posted in climate change, Energy, General geoscience. Bookmark the permalink.