The preamble to this series of reviews is here. All reviews can be found under the category “Canadian Earth Science for @PMHarper”

Lots of research goes into attempting to make better earthquake prediction and this is of course necessary because the casualties are enormous: about 800,000 people died in earthquakes worldwide between 2000 and 2012. Many earthquake casualties occur because people are crushed in collapsing buildings and this happens especially in countries that don’t have the right building codes or where building codes were ignored. The latter usually happens due to poverty, lack of good governance and/or corruption (see my older post here).

Two regions in Canada are susceptible to earthquakes. In the west is Coastal British Columbia, which is situated on the large and active Cascadia fault (a good popular book about this feature and its associated risk is ‘Cascadia’s fault‘ by Jerry Thompson). 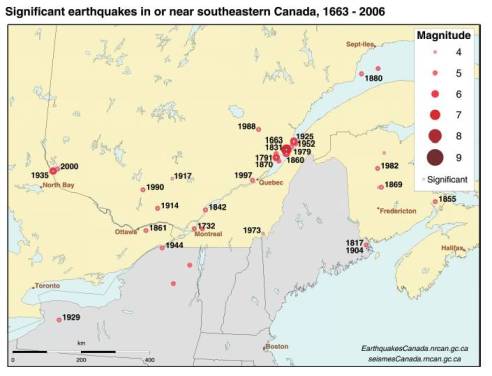 These figures show clearly that no truly large earthquake has ever struck eastern Canada, and we understand geology enough to be sure that that will never happen. However, smaller earthquakes can create all kinds of havoc and damage. As recently as 2010, an earthquake with moment magnitude 5.0 struck near Buckingham (QC) and was felt widely, also in Ottawa.

So earthquake-prone regions require the design and legalisation of building codes But how to quantify this kind of risk? And especially – how to quantify risk for something that happens rarely, such as a – mild – earthquake?

This is the focus of the article by Atkinson and Goda.

The paper is a contribution towards refining the risk of seismic hazard in coastal British Columbia (particularly Vancouver) and eastern Canada (particularly Ottawa, Montreal and Quebec City). The article does not aim to predict earthquakes in time.

The authors ask a question that can be phrased more or less as follows: “given that earthquakes of certain magnitudes occur in these regions, how large is the risk of damaging ground motion (and what implications does that have for building codes)?” To make that question a little easier to understand, you can think of the following question as an analogue: “given that about 2,000 people die in traffic accidents annually in Canada, how large is the risk for a Canadian to die in traffic?” If you wanted to answer that question, you would start collecting data over many years. You wouldn’t only count fatalities, but also age, gender, home province, type of transportation, etc.  and then do the math (Statistics Canada has done that).

It’s more complicated to estimate seismic risk, but there are methods. These methods are based on an in-depth knowledge of the geology of a certain area (which tells us where the zones of weakness in the earth’s crust are). The models also require systematic information on every earthquake that strikes: its depth, its magnitude, over how large an area it was felt, etc. This information is collected constantly. The longer we collect this information, the more precise the models.

Geophysicists have developed models that enable predictions of ground motion on the basis of such data collection. Such models characterize the expected ground motion for a given risk (=probability). They are called “Seismic Hazard Models”

The standard Seismic Hazard Model for Canada was developed by the Geological Survey of Canada  about 20 years ago. This model is the basis for our national building code. Of course, a lot more data have become available in 20 years and – just as important – insights and computer power have improved tremendously. So it’s appropriate to revisit and, if necessary, revise, improve and refine the model.

For example, a better model can improve risk estimates for soil liquefaction, a nasty ‘byproduct’ of some earthquakes: the 1988 magnitude 6 Saguenay earthquake (shown on figure 2) caused liquefaction at 25 km from the epicenter. A good 2011 CBC report discusses the risk of earthquake-induced liquefaction for greater Ottawa.

The biggest earthquake that occurred in Southeastern Canada was the 1663 Charlevoix earthquake (magnitude 7). The authors estimate that this was really a ‘clustered event’, meaning that it consisted of a series of quakes over a period of several hundred years, separated by quiet periods that may last thousands of years. This pattern is related to the geologic make-up of the region, mostly a very old fault that dates back ca. 400 million years. Such seemingly erratic activity can only be properly analyzed and modeled using advanced statistical methods.

After applying their improved methodology and incorporating new data, the authors show that the refined model results in different risk predictions for the four cities. Their model deals better with a number of uncertainties: certain risk windows become narrower. It looks like the seismic hazard for these regions is lower than the original 1995 model predicted. This would be good news (if the model is reconfirmed after additional testing) because it would save money on building codes.

Dr. Gail Atkinson is a seismologist. She is Canada Research Chair in earthquake hazards and ground motion at the University of Western Ontario. A recent article in Time Magazine on concerns about hydraulic fracturing and earthquakes in Ohio quoted Dr. Atkinson. Many areas where hydraulic fracturing takes place do not have proper regulations for this industry in place (industry is always ahead of the law). Dr. Atkinson said: “There’s a very large gap on policy here. We need extensive databases on the wells that induce seismicity and the ones that don’t. I am confident that it is only a matter of time before we figure out how to exercise these technologies in a way that avoids significant quakes.” In other words: correlation doesn’t necessarily mean causality: not every observed earthquake in Ohio has to be caused by hydraulic fracturing and you need a lot of detailed data to do a proper analysis, after which it is possible to write proper regulations.

I am an earth scientist. Understanding earth is essential for the well-being of our global society. Earth is fascinating, science is fascinating and a better understanding of both can help society forward. This blog attempts to make a contribution to raising awareness of these issues.
View all posts by earth science society →
This entry was posted in Canadian Earth Science for @PMHarper, General geoscience, Natural hazards and tagged Canada, earth science, earthquake, geology, geoscience, natural disaster, natural hazard, Science. Bookmark the permalink.